Chennai Super Kings have won all four of their home games at the MA Chidambaram Stadium in Indian Premier League 2019 but captain MS Dhoni isn’t impressed with the sluggish nature of wicket on offer. 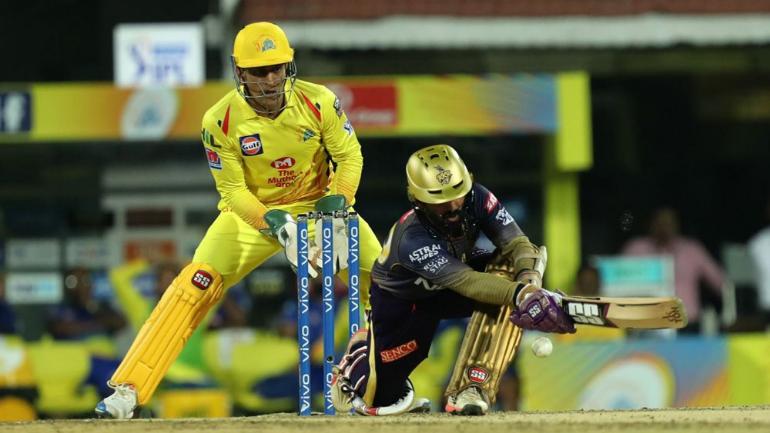 Chennai Super Kings captain MS Dhoni on Tuesday expressed his disappointment at the pitch conditions in MA Chidambaram Stadium despite the defending champions winning all their four matches at home in Indian Premier League (IPL) 2019.

Chennai Super Kings clinched a comfortable seven-wicket win over Kolkata Knight Riders to seal the top spot of the eight-team IPL 2019 table. KKR struggled to get going on a sluggish pitch wherein batsmen were finding it difficult to put bat to ball. Andre Russell though managed to work his way to a half-century helping KKR go past the 100-run mark in the 20th over of the innings.

In reply, Chennai Super Kings never even got to the fourth gear while batting but still managed to get home in 17.2 overs.

“We have been cribbing about the track but we have ended up winning the game.”

Notably, Dhoni had slammed the pitch at the MA Chidambaram Stadium after the IPL 2019 opener wherein Virat Kohli’s Royal Challengers Bangalore were bowled out for just 70 runs. Even Kohli had expressed his disappointment at the rank turner that was on offer during the first match of the season.

Chennai Super Kings spinners, including veterans Harbhajan Singh and Imran Tahir, have relished bowling on this wicket. The seasoned campaigners were at it again on Tuesday as they picked up four wickets between them, conceding just 36 runs in 8 overs.

Meanwhile, young fast bowler Deepak Chahar won the Man of the Match award for his match-winning spell of 4 for 20. While Chahar had been completing his four-over quota inside the powerplay, unavailability of West Indies all-rounder Dwayne Bravo due to an injury forced Chennai Super Kings to give the right-arm pacer overs at the death.

Chahar responded well on Tuesday and even went on keep the big-hitting Andre Russell quiet in the 19th over of KKR’s innings.

“I think I knew we are going to play a lot of games at Chennai. So, I worked on my slower ball and yorkers. I spend a lot of time in the dressing room with MS while playing Table Tennis and I have got to learn a lot from him. With Bravo injured, I have got opportunity to bowl at the death,” Chahar said.