India is voting to elect its 17th Lok Sabha. Three phases of polling have been held while four are still to go. The results are scheduled to be declared on May 23.

Moneycontrol correspondent M Saraswathy is on a 1,300-km journey via road from Mumbai to Bhopal via Daman, Surat, Ahmedabad, Bhilwara, Guna and Itarsi. The idea behind this initiative is to understand the pulse of the local businesses and their assessment of government policies. It is a report card through the eyes of local entrepreneurs and farm owners.

This is a diary of her experiences as she traverses through different regions:

12.54 pm: While the new government in Madhya Pradesh under chief minister Kamal Nath announced a Rs 50,000 crore farm loan waiver in the state, implementation issues are still to be ironed out. After the scheme was launched in January 2019, there was a case of a farmer receiving Rs 13 waiver instead of Rs 24,000. After this was reported, the MP government has sprung into action to ensure that small farmers with loans up to Rs 2 lakh get the complete benefit of the scheme. The scheme, titled, Jan Kisan Rin Mukti Yojana, could prove to a vote-puller during the Lok Sabha Elections 2019. The Congress government went ahead with this scheme that was a part of the Assembly poll promise, despite stiff opposition from BJP which called it economically unviable.

08.35 am: At Guna in Madhya Pradesh, it is a poll fight between former party colleagues. Incumbent Jyotiraditya Scindia from Congress and KP Yadav from the BJP are contesting from the Guna constituency. Interestingly, Yadav joined BJP last year from INC. Party insiders said he felt neglected and that his work was not acknowledged by Congress leaders. But now that he has been pitted against Scindia, it will make some impact. Yadav used to be a confidante of Scindia and is well aware of his strengths and weaknesses. While Scindia still remains the people’s favourite in Guna, KP Yadav could make a slight dent in this scenario since he could influence the sizeable Yadav community in this region to vote for BJP.

5.25 pm: As the Chambal Bhilwara Water Supply Project is gaining momentum, both Congress ans BJP claim it to be their pet project.

In 2013, Sonia Gandhi had laid the foundation stone for this project that looked into the issues of the quality and quantity problem of water in Bhilwara district.

However, BJP workers claim that it was their party who took all the concrete steps to institutionalise this process and ensure proper timelines for the project. Clear water pump house, clear water system, storage system & distribution network for the Bhilwara town are proposed as part of the project design to be implemented by 2030. Meanwhile, both parties are milking this scheme to their full advantage in their poll campaigns.

12.33 pm: A local political unit, Bharatiya Tribal Party (BTP), has become a pain point for both BJP and the Congress in this election.

Local leaders of both Congress and BJP, in Rajasthan, are of the view that BTP will find favour among the local Bhils and other tribal communities. Both parties are viewing BTP as a threat and will try to get them to possible ally after the election.

8.53 am: While Congress may have won the Assembly election in Rajasthan, it is going to be a tough fit in places like Bhilwara which is a part of the Mewar region. Political analysts say that those who win this region win the state as well.

With BJP trying to charm the locals using the popularity of PM Modi, Congress is focusing on local issues. Be it farmers’ minimum wages, water scarcity or tribal welfare, Congress wants to bring those issues to the forefront in this election.

Infighting among BJP workers after the Assembly polls debacle is being used as a full advantage by Congress. A state where caste dominates individual voting decisions, it is to be seen who wins the general election battle.

5.13 pm: It is a battle against water scarcity as soon as you reach the entry point to Rajasthan. With scarce rainfall and drying rivers, the state is witnessing a heat wave since the last two weeks. Water is a precious commodity across rural and urban Rajasthan. 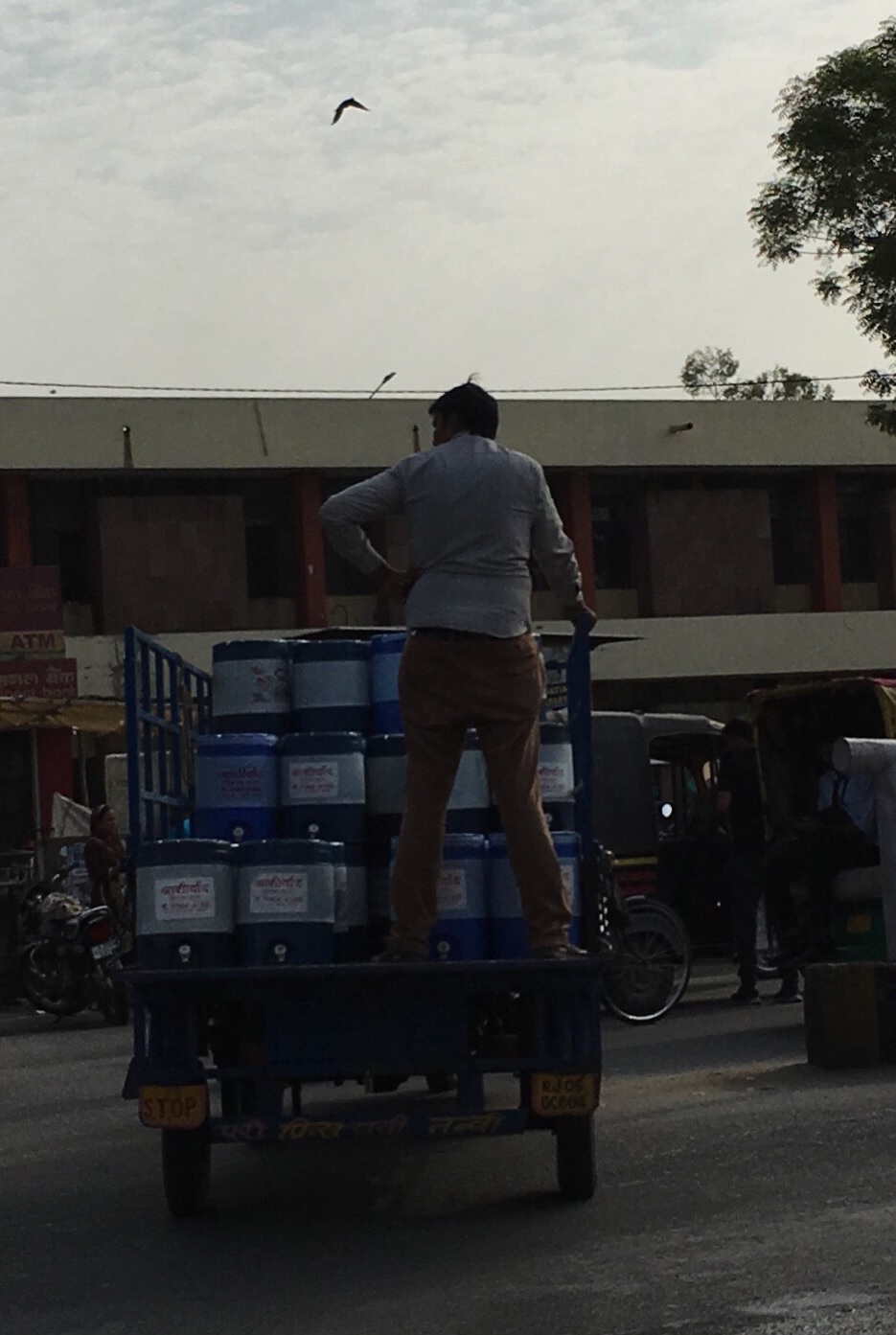 Urban areas are notorious for the tanker mafia, who are known to charge exorbitant rates from those in need. Efforts from local NGOs to create awareness about water conservation have fallen on deaf ears. While there are plans to revive the process to dig deeper to find the lost river Saraswati and a potential blessing for the parched state, the wealthy can still afford to buy water from private parties. It is those who belong to the lower economic strata who are fighting a tough battle for water supply.

1.22 pm: Amidst the Clean Ganga mission, clamour to clean the Narmada river is also growing. Ahmedabad-based Bhavik Desai and a handful of denim traders have sought a similar funding proposal for the Narmada as well. While Desai admits that the Narmada is cleaner than the Ganga, there is a paucity of funds to keep it clean on a continuous basis.

“We could start from Rs 50 crore a year and then increase/decrease the amount on the basis of the cleanliness of the river,” he added. This group is planning to send a detailed campaign once the new government is sworn into power in May. He is of the belief that more than the inter-linking of rivers, cleaning all the holy rivers is of utmost importance.

8.10 am: The Goods and Services Tax (GST) regime, that was introduced to simplify the system of indirect taxes in the country, is still taking time to stabilise in regions in Ahmedabad.

Gujarat missed the 14 percent targeted growth in GST collections by almost Rs 7,000 crore and has sought central government assistance to meet the gap.

This is primarily due to a shortfall in business revenues and margins by large industries like the denim market in Ahmedabad that is facing huge cost pressures. Some family units have pivoted to other apparels like rayon and polyester while others have shrunk business operations.

5.14 pm: With only 52.59 percent voter turnout in Surat till 5 pm as per the Election Commission data, several traders have started getting calls from local party offices asking them to vote if they haven’t. Diamond traders, in particular, were asked to keep their business units closed on April 23 to ensure that all local employees are given a chance to cast their votes.

Unlike other states, Surat has most votes cast between 7 am and 10 am with first preference being given to senior citizens and differently abled followed by pregnant women. In urban Surat, voters prefer the 7 am slot because it is cooler and finding a parking spot outside polling booths is easier — unlike states like Maharashtra (especially Mumbai) that restrict any vehicle from being in a 100-metre vicinity of any polling booth. “We officially have such rules too. But what can we do? If we stop cars, people will not even come to vote,” says a security officer stationed outside a polling booth near Surat railway station.

1.03 pm: While the whole country swallowed the goods and services tax as a bitter-sweet pill, a family of Marwadi traders settled in Surat thinks otherwise. With GST, they claim that they are able to spot fraud and from which level in the buyer value-chain it originates from. Since all levels of the transaction have been made paper-less, this has aided them in curbing fraud at the base itself. Earlier, they claimed that small frauds of Rs 2-5 crore went unnoticed. That is no longer the case, they added. However, the short-term pain of GST will last for another 6-8 months and these traders are ready to bear it. “We at least know Darshana Jardosh and the groundwork she has done for the city. The other candidate is barely seen,” claims Haribhai Damania, a textile store owner.

9.57 am: While BJP youth have set up stalls across Surat on the poll day, similar ones of INC were conspicuous by their absence. BJP’s incumbent candidate Darshana Jardosh is contesting against Ashok Patel of the Congress. Locals state that Surat has traditionally been a BJP bastion, though there is some tilt towards the Congress after the GST was introduced. From nil GST, textile traders have to pay between 5-12% GST based on the type of the goods sold.

8.31 am: The absence of star campaigners has been a bit of a letdown in the Lok Sabha elections 2019 in Surat. Traders across the city have been urged by the industry association to go out and vote in large numbers. In the absence of big rallies or major Gujarati and Bollywood stars taking part in the campaign this year means that traders would use this day as an extended weekend to go out for a short vacation.

However, both Congress and BJP party workers have personally met Surat textile and diamond traders over the past 2-3 weeks asking them to exercise their democratic right.

7.21 am: Ahead of the Lok Sabha elections 2019 in Surat, hotels across the city are doing brisk business. With election officials and police personnel on election duty checking into such facilities in large numbers, hotels are also making use of this opportunity. Average room rates are up by 20-25 percent, said a hotel owner on the Surat Railway Station Road that houses multiple polling stations.

Similarly, the handful of hotels on the textile market road too have been booked out almost one month before. This is despite the fact that the average room rent is Rs 3,800 onwards in 3-star hotels. April is generally considered a lean season because those from neighbouring areas of Gujarat go on religious tours to places like Dwarka or on leisure trips to locations like Goa and Shimla.

4.29 pm: Daman, which is often frequented by Gujaratis for the availability of liquor, is still reeling under the impact of the Supreme Court ban on alcohol sale along highways. While the ban was revoked, local liquor shop owners said there is frequent checks by traffic police and heavy fines are imposed on those in possession of more than one bottle of hard liquor. “If you want tourism to grow, alcohol is an important attraction point. On one hand, asking for bribes to allow carriage of liquor is not uncommon. On the other, tourists are also manhandled and forced to pay money to police personnel,” said Amitesh Hari, owner of Harinam Wines.

12.42 pm: At first glance, Daman — touted as a tourist destination — seems to be missing one important sanitation facility: public toilets. Be it the shopping areas or the roads to the beach, toilets are either missing or non-functional. While the Daman & Diu waste management and sanitation policy 2018 stated that the Union Territory has been declared open-defecation free, the reverse is true. Not only does the beach front have inadequate toilet facilities, a problem especially for female tourists, the few constructed have been poorly maintained. Government figures show that 675 and 3,003 toilets have been constructed in urban and rural Daman respectively, under the Swachh Bharat Mission. At least 20 percent of those are unsanitory. The actual figures of unusable toilets, locals state, are 40-45 percent of these units.

9.48 am: Poll-bound Daman wears a deserted look with most bars shut till 6 pm on April 23. The Union Territory goes to polls on Tuesday. While incumbent MP Lalubhai Patel has been nominated by the BJP for the third time in a row, local party workers said they were unhappy over other faces not being given a chance. A local party worker said the fight will be a close call this year, with Congress re-fielding Ketan Patel and BSP fielding Bhavesh Patel. Infrastructure development has been a key area of focus in this region, though local businessmen have opposed widening of roads that will lead to demolition of roadside eateries and wine shops.